Multiple gunmen armed with AK-47 machine guns attacked the installations of the State Attorney-General’s office and the C4 municipal police building of Cancún, Quintana Roo, at 4pm. Jan. 17 –a day after five people including four foreigners were killed when a gunman opened fire in the Blue Parrot nightclub in the neighbouring city of Playa del Carmen.

The attack on the judicial and law enforcement buildings was repelled but resulted in the death of a policeman. A manhunt for the 10 heavily-armed men who escaped the scene on 5 motorbikes was then mounted and grew to include both state and federal police, as well as members of the Mexican military and Special Forces.

Over the next three hours gunfire broke out on Kabah avenue, Nichupte avenue, the las Americas and las Palmas shopping centres, as well as the entrance of Cancun’s prestigious Hotel Zone –a peninsula on the Riviera Maya popular amongst foreign tourists– provoking widespread chaos and terror across the city. 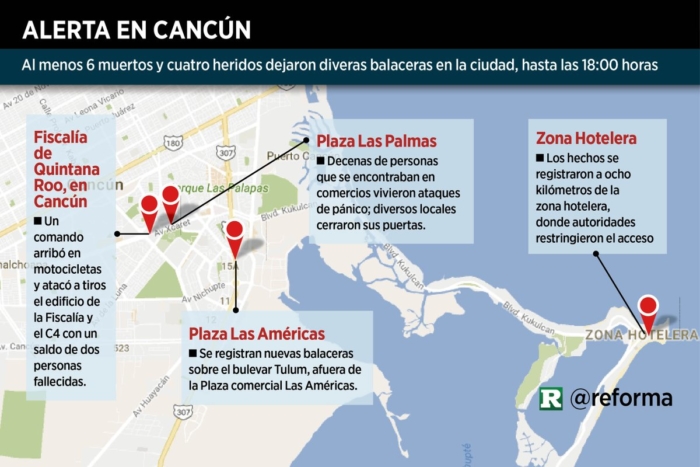 As shootouts between the gunmen and police continued until 7pm, video footage has emerged of people caught amongst the the crossfire taking refuge in shops or behind cars, as well as terrified commuters on a moving bus crouched beneath the seats as gunfire cracks around them. Another video in an office building shows a man screaming out to his colleagues to get on the ground as bullets pass above their heads. 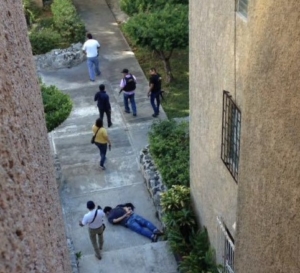 On Nichupte street, an eyewitness filming another shootout tells of two armed fugitives who arrived on motorbike and took over a residential apartment block where a shootout then began against the police.

The police blocked off the entrance to the street but the impact of a grenade launcher was evident on the wall of a neighbouring building. A photograph which later appeared of the body of one of the fugitives shows two pistols and a grenade launcher.

As of this moment, 3 men believed to have been involved in the initial raid on the State Attorney-General’s office have been killed while 5 others have been detained and are under investigation. The Mexican military has reportedly been deployed in areas where the shootouts occurred and the entrance to Cancúns Hotel Zone has been closed to protect the numerous tourists along the peninsula.

Narco-terrorism is nothing new in Mexico, but these unprecedented attacks over the last 48 hours have led many to believe that the drug wars plaguing other parts of the country has now arrived in the nation’s tourism capitals of Playa del Carmen and Cancún.

In Playa del Carmen, a 45 minute drive from Cancún, the police are investigating four «narco-blankets» with hand-written messages which were hung in various locations around the seaside city popular with tourists from around the world.

The cryptic message, seemingly taking responsibility for the attack on the Blue Parrot nightclub during the BPM electronic dance music festival, claims to be written by «Fayo Z» of the Zetas drug cartel. 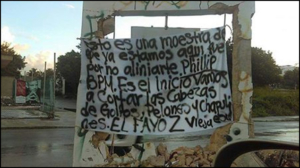 This is a sign that we are already here because you didn’t align PHILLIP -BPM, it is the beginning we are going to cut the heads of Golfos, PELONES and chapulines, Atte [Sincerely] el FAYO Z from the old SCHOOL»

After the attack on the State Attorney-General’s office, Carlos Joaquín, the newly elected governor of Quintana Roo, stated on the public broadcaster that the incident was a response to his government’s investigation into the corruption of the former governor Roberto Borge, as well as the repeal of the «impunity package» that would have shielded Borge from prosecution.

«A key element to combat impunity is to be able to count on an autonomous, impartial, and objective prosecutors office.» Carlos Joaquín stated, «Todays armed attack by criminal groups on the State Attorney-General’s office, frames in this context our the fight against impunity.»

«I reiterate, the fight against corruption and impunity is serious.» Governor Joaquín continued. «Those who attack society and its laws will pay for it!»

The former governor Roberto Borge is widely believed to have stolen tens of millions of dollars of public money while in office and is currently under an investigation by the State Attorney-General’s office.